The Church of St. Eliseus

The chapel of St. Eliseus in Draguć preserves the fresco depicting the chivalric battle on the surface of the velarium, the single figure scene of such kind in Istria. 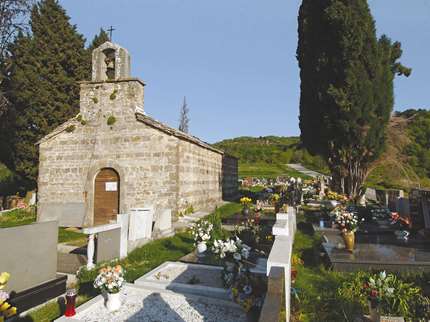 The first church you come across, at the very entrance to Draguć, is the cemetery chapel of St. Eliseus, built in late 12th c. Eliseus is an Old Testament Prophet, a disciple of Prophet Elias. His cult was confirmed in Istria very early, and the church near Fažana dedicated to him as early as the 6th c. is the earliest example. The church in Draguć is a simple building in the middle of the cemetery, surrounded by cypresses. Only the colour scheme of its facade makes it different from other Istrian chapels. Its exterior is unplastered, built of two kinds of stone, the darker and lighter sandstone, alternately laid in regular horizontal rows, making it a miniature copy of the Tuscan Romanesque churches. Frescoes in St. Eliseus dating from the 13th century were discovered as late as 1946. They represent the Christological iconography, dominated by yellow, red and green, extending along the southern and western wall of the church. The best preserved scene is that of the Crucifixion in the centre of the northern wall. Besides its position, it is also accentuated by a wide, perpendicular bordure. Depictions of the Annunciation on the triumphal arch, Christ Enthroned in the conch of the apse as well as scenes from Christ’s life on the other walls are the usual iconography. Also interesting are depictions of souls in the Lap of Abraham (three patriarchs), wealthy men in infernal agony, the parabola of poor Lazarus and the chivalric battle on the surface of the velarium. The latter is the only figural scene of such kind in Istria. Human figures on the frescoes are treated rather summarily, only necessary is depicted, with no details. The background is flat two-dimensional, without the illusion of space. The mural paintings are attributed to the workshop from the end of the 13th century which corresponds to local art trends and forms one group together with the frescoes in Bazgalji jointly called Istrian rural Romanesque forms.