The Early Baroque Belgramoni-Tacco Palace is one of the most beautiful palaces in Koper. It was named after it had been lost by the Belgramonis to the Tacco family in a gambling match. 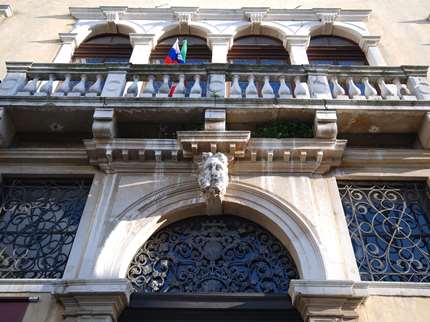 From Tito Square go along Kidričeva Street, a few steps further on the left is the Belgramoni-Tacco Palace (Regional Museum of Koper).

Built around 1600, the Early Baroque Palace of the Belgramoni-Tacco family is one of the most beautiful in Koper. Its magnificent entrance, the museum lapidarium and a wall encircled beautiful garden make this structure, which today houses the Heritage Museum of Koper exhibiting the palace, town and the region historical collections, particularly charming. The palace is used today for musical and cultural events due to its exquisite acoustic hall. Located on the Museum Square, in the immediate vicinity of Kidrič Street, it is an example of the Mannerism architecture, the transitional period from Renaissance into Baroque. There is an intriguing story surrounding the emergence of its name, Belgramoni-Tacco, according to which a nobleman from the Belgramoni family lost the palace to the Taccos while gambling in a single night. The present palace was erected on the site of a former structure, best observed on the central axis of the facade, the top of the semi-circular entrance portal decorated by a sculpture of a man's head. Along the same axis, above the entrance portal is a quadrifora with the semi-circular finish giving way to a large ceremonial hall. Apart from the hall, there is a magnificent staircase inside the palace which connects the antechamber and the first floor i.e. a festival hall. Behind the palace are the remains of former gardens which have been restored for the needs of the museum lapidarium. Special atmosphere is an excellent background for numerous cultural events organized on this venue.

From Tito Square go along Kidričeva Street, a few steps further on the left is the Belgramoni-Tacco Palace (Regional Museum of Koper).