The Castle of Pazin

The Castle of Pazin is the biggest and best preserved fortress in Istria. Its appearance changed with its owners. It is the site of the Jules Verne's Mathias Sandor. 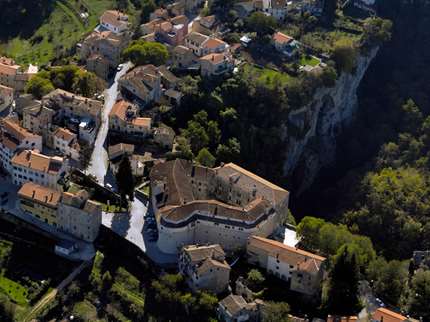 The Castle of Pazin is a well-defended fortress located on the edge of the Pazinčica river abyss. It is also the biggest and the best preserved medieval fortress in Istria. It was first mentioned in 983 in the deed of gift by Emperor Oton II, giving the castle to the Poreč Bishop as a present. During next two hundred years, the castle often changed its owners. It is known that the daughter of Menhard von Scharzenburg, its owner, married into the family of the Counts of Gorizia bringing it into their ownership until 1374 when it was taken over by the Habsburgs who continued to rule the entire area of central Istria i.e. the Pazin County behind these powerful walls. The power and strength of the castle was confirmed by it never being conquered in the war against Venice. The inhabitants of Pazin had a lot of independence and freedom for that time, which had hugely differentiated them from most of their peasant neighbours. In the 17th century, the castle was bought by Marquis Montecuccoli from Modena, who owned the feudal land until the mid 19th century. The fortress stayed in their possession until 1945. As the edifice was in use for over a thousand years, it constantly changed its exterior. The semi-circular tower was added after 1463. The literature describes the first fortress as the elongated two-floor building with a tower and a church with a small belfry built next to it. In time, the castle became a powerful masonry fort built by various owners throughout the Middle Ages and the New Era. The Pazin Abyss, a mysterious pit which has always inspired human imagination, is located underneath its walls, which have always been accessed by a drawbridge. Jules Verne, the father of SF, put the plot of his Mathias Sandorf novel in the Castle and the Pazin Abyss. Today, the Pazin Castle houses the Ethnographic Museum and the Museum of the City of Pazin with exhibits of the life of the Istrian peninsula inhabitants.