The Castle of the Polesini family

The noble Polesini family built a castle with the park and supporting building in the Palladian style. It seems the house design was the work of Andrea Palladia. 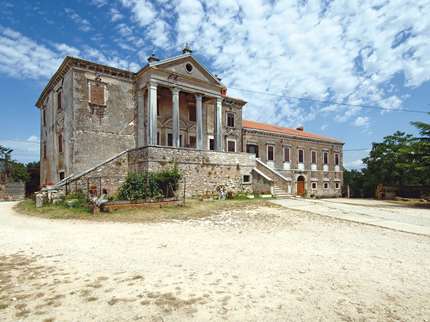 Three kilometres north of Baderna, on the local road to Majkuse and Muntrilj, some 500 meters east from the Pula - Buje state road.

St. John of Šterna is a village near St. Lovreč and the former representative castle of the Polesini family. The estate was given as dowry by the Scampicchio family in 1688 to the Gravisi family who later became Marquis Polesini. The Venetian Apollonio family was also mentioned as one of St. John of Šterna's owners. The noble Polesini family built a castle with the park and neighbouring buildings in the Palladian style on the hilltop near the village, the site of an earlier older castle. It seems that the castle was built according to layouts designed by famous Renaissance architect Andrea Palladio himself. It is probably the most beautiful Classicistic structure in Istria, a perfection of Classical architectural composition. Recent research has found that the castle had probably obtained its final form in the 19th century. The main residential building, which is at the same time the biggest structure of the entire complex, has a monumental Classicistic facade with a pronounced two-storey avant-corps and a four column porch accessed by a wide staircase. A large central salon was put up in the ground floor entrance area. The Polesinis moved the original staircase into their new villa on the St. Nicholas Island in front of Poreč in the late 19th century. A spacious rectangular park surrounded by the wall was also an integral part of the castle. Other structures used for economic purposes were placed within the walls. There is also a Baroque stone cistern with exquisitely carved details and surrounded by a short wall in the yard. A four-corner tower is a reminder of an older castle, which can still be recognized on the northern side of the castle. The palace is inhabited, but very neglected.

Three kilometres north of Baderna, on the local road to Majkuse and Muntrilj, some 500 meters east from the Pula - Buje state road.