The Church of Blessed Virgin Mary in Božje polje

Late Gothic frescoes from the Church of the Blessed Virgin Mary were made by the workshop of John from Kastav. This is his first and best quality work. 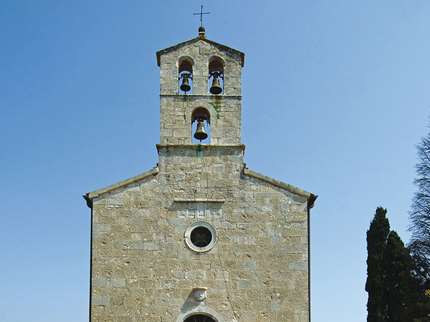 The Church of the Blessed Virgin of Mary is a cemetery church, 2 km west from Vižinada, in the direction of Poreč.

The church in Božje Polje was first mentioned in the 11th century, although fully built in the late 15th c. Although both the Franciscans and Knights Hospitaller were not commonplace in Istria, they left an indelible imprint on the history of Božje polje. In addition to the valuable church inventory, one of the mentioned imprints are the Late Gothic frescoes dating approximately from 1480. They were painted by the workshop of John from Kastav, and it seems that this is both its first and best quality work. On the northern wall are the virtually copied pages one and eight of the Biblia pauperum. These are the scenes of the Original Sin, Annunciation, David's Prayer and other. The only exception from this iconographical pattern is the Coronation of the Virgin. The ceiling of the sanctuary depicts the iconography Symbolum apostolicum: in the central fields are zoomorphic symbols of the Four Evangelists holding scrolls containing the beginning of the corresponding Gospels in Latin. They are surrounded by eleven Apostles with scrolls of fragments of the Apostles' Creed. The Apostles are then surrounded by angels holding instruments or scrolls with fragments of the Glory. Behind the altar is the image of Christ seated on a throne as a ruler wearing a crown and holding an apple with cross, the symbol of royal authority. All these scenes are supplemented by numerous prophets and female saints in the window embrasures. On the southern wall of the nave is a preserved fresco, an imitation of an altar screen. In the middle is the image of the Virgin and Child surrounded by angels, and St. Peter and St. Paul standing on the side. Below this scene is a shallow niche depicting the Throne of Wisdom - with God the Father seated on a throne holding his Son, crucified Jesus Christ and between them the dove of the Holy Spirit. The graphic models of this workshop are of Dutch origin. In addition to the already mentioned Biblia pauperum, graphic sheets of Israhel van Meckenem were used. Apart from these Late Gothic influences, there are also those reflecting the late soft style of South-Bohemian easel painting.

The Church of the Blessed Virgin of Mary is a cemetery church, 2 km west from Vižinada, in the direction of Poreč.