The Church of St. Agatha

Christ is represented as a young beardless man holding an unusual inscription : REX IUDEORUM. The fresco can be seen in the St. Agatha's Church. 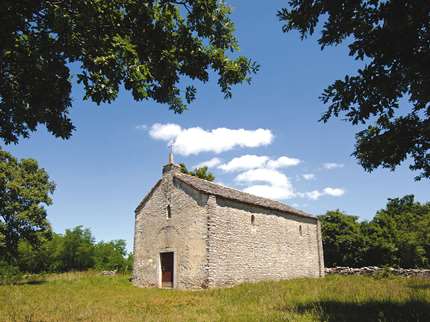 The church is located on the road to Barat, only two kilometres north-east from Kanfanar.

The Church of St. Agatha, the early Romanesque building with the interior semi-circular apse, although typologically related to the Pre-Romanesque building tradition could have been built later. Mural paintings are dated back to the second half of the 11th century due to their composition and technical characteristics. In the lower register of the centre of the apse is an image of the Virgin Mary in the praying position flanked by five Apostles on each side. Christ is represented as a young beardless man holding an unusual inscription : REX IUDEORUM. On the triumphal arch the customary scene of the Annunciation is replaced by the scene of the Cain and Abel's Offering. St. Agatha and St. Lucy are depicted in the fields under the triumphal arch. Geometrical bordures repeat the ornamental repertoire characteristic of Carolingian painting. The painter highlights the horizontals by such a composition, the division of the wall surface behind the Apostles and the use of bordures. The Apostles are depicted in simple, hieratic postures, the static quality of the composition being underlined by the colour alternations of their garments. It is somewhat interrupted only by the scene of Christ with his hands wide open in the conch of the apse, as well as Apostles presenting gifts. Such composition emphasizes the central scene of this iconographic program. By using a limited palette, the painter achieves interesting colourist accords. Faces and hands are shaped by the complementary contrast of green and red. All the colours were painted onto a layer of fresh plaster except for the white pigment which was used for lumeggiature and inscriptions above the Apostles, merely visible today. The eyes of the Apostles have been scratched off, which is not an act of vandalism but the belief of ignorant people that they would cure eye disease with the scratched off powder. Apart from being famous for the cure for eye diseases, nursing mothers whose milk had dried up would make a pilgrimage to St. Agatha's Church, who was tortured and whose breasts were cut off.

The church is located on the road to Barat, only two kilometres north-east from Kanfanar.