The Church of St. Catherine

Frescoes in the picturesque St. Catherine Church were dated back to the early 15th century by a Glagolitic inscription. 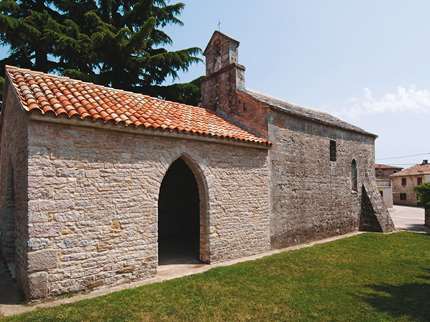 Lindar is located five km southeast from Pazin, on the Labin road. The St. Catherine Church is located on the left side just before the entrance into the village. There are four more churches.

This small church is exceptionally picturesque with its added portico on the front and the star-like rosetta on the back. Although simple in form, the window transenna on the aft wall and the interior division into bays with cross vaults are elements of architecture that indicate the Gothic style. Until recently, the only discovered fresco was the Living Cross on the northern wall of the first bay. It was dated by the Glagolitic inscription on one of the painted scrolls in 1409. Other scrolls also bore Glagolitic inscriptions that have faded and become illegible. The painting is divided into two parts by a bordure of stylized clouds. In the upper part is an allegoric representation of Heavenly Jerusalem with God the Father. In the lower part of the scene the Crucifixion is transformed in such a way that its arms extend into four human arms. One of them stabs with a sword the head of an allegoric representation of a synagogue, riding a donkey blindfold, holding a kid in one hand, and a broken pole with a flag bearing a scorpion, in the other. This is meant to symbolize the abolition of the Old Testament. The Church of the New Testament is the crowned figure kneeling on symbols of the Four Evangelists while it is blessed by one of the arms of the cross. The upper arm unlocks the door of Heavenly Jerusalem to the blessed souls, while the lower breaks the door of the Limbo as the devils resist, throwing at them arrows from their bows. The scene contains two other symbolical figures. The angel with the organ represents harmony, while the disharmony is represented by a devil playing two trumpets and passing wind beneath the goat’s tail. In the left part of the composition is the figure of St. Catherine, the titular of the church, holding a broken wheel, the attributes of her martyrdom. Recent restoration has revealed remains of frescoes on the sanctuary wall. They differ from the Living Cross by colour, which indicates that the colour has faded in the course of time or by restoration. In the newly discovered fragment we can recognize the scene of the Kiss of Judas. St. Peter’s face, with a characteristic hairstyle with tonsure, modelling of the eyes and a large, expressive nose, may be compared to the one of the Apostles inside the apse in Butoniga. Besides the already noticed similarity of stencil patterns, it confirms the connection of these cycles.

Lindar is located five km southeast from Pazin, on the Labin road. The St. Catherine Church is located on the left side just before the entrance into the village. There are four more churches.