The frescoes within the St. Helen Church shows both Christian and profane topics. The Christology iconography is intertwined with the scenes from Aesop's fables. 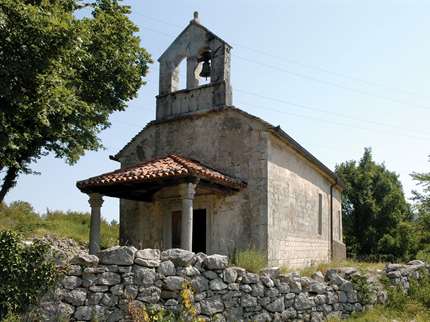 The Church of St. Helen in Gračišće geographically does not belong to Istria, but to Slovenian Karst. However, culturologically it is an integral part of Istria. It has frescoes by John from Kastav, a Late Gothic Istrian painter who was educated in the Alpine cultural circle, most probably in Carinthia. This is one of the warmest church interiors, carefully taken care of and maintained by local population, aware of its value. The entire length of the church is Gothic, single-nave, with an elongated irregular pentagonal sanctuary arched by a stellar vault. Dating back to the 14th century, the Baroque adaptation raised the nave and joined it with the sanctuary by a slate roof. A massive bell gable was added to its front, with two bell openings and a miniature portico resting on two columns. Among the modest inventory, quality Gothic frescoes stand out. On the northern wall stands the long procession of the Adoration of the Magi with many solemnly dressed figures and adorned horses reflecting the court magnificence of the time. The scene is enriched by a number of scenes from fables, such as the battle between the wild man and the bear, Aesop’s fable about the Fox and the Crane. Other paintings in two registers on the western and southern walls represent the scenes of the Passion of Christ. It shows three wise men on their way to Jerusalem, Herod's Farewell on the left, and numerous narrative details and images from the animal world underneath. The passion of Christ starts on the western wall with the image of entering Jerusalem, while the Last Supper on the left has been destroyed.