The Church of St. Martin

The interior of the biggest Romanesque church in Istria is decorated by 11th century frescoes, which makes them one of the oldest on the peninsula. 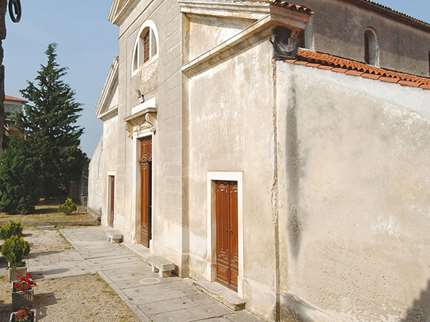 The Church of St. Martin is located in the centre of St. Lovreč, on its main square.

The parish church of St. Martin is a three-nave basilica with three apses. It was built in the 11th century and renovated in mid 20th c. The Municipal Loggia is leaning along its southern wall. St. Martin is also the biggest Romanesque church in Istria with one of the oldest preserved frescoes. In the northern and southern apse of this three-aisled edifice are the recently restored frescoes. They date from the period of the Ottonian Renaissance; surpassing in quality all other examples of such art, including the original examples of Ottonian art. The best preserved are monumental figures of saints in the southern apse. In the conch of the apse is the iconography of Late Antiquity depicting Christ astride surrounded by archangels. The iconography of this scene stems from the Late Antiquity. Despite being individually portrayed, details have a repeating pattern. The basic expressive means used by the author was the colour, which probably originates from the northern Italic area. The northern apse has partially preserved frescoes that cannot be precisely interpreted since they are ruined by the Gothic ones in the lower part. The younger layer of mural paintings in the northern apse can be associated with the ones in Prodol, at least because of the unique bordure with anthropomorphous sun. They are dated to the 14th century originating under the Italian influence.

The Church of St. Martin is located in the centre of St. Lovreč, on its main square.