The Church of St. Mary

The fresco cycle in the Church of St. Mary was painted by several masters, among which the best well known was Klerigin from Koper and the Colourful Master. 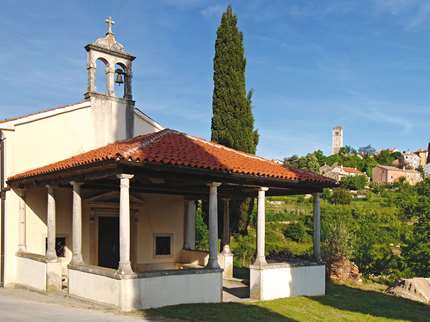 The Church of St. Mary is some hundred meters below the village.

The Church can not be visited except during Holy Mass.

St. Mary’s Church is situated beneath Oprtalj, along the road that leads to Zrenj, Šterna and Buje, in the shade of the cypresses standing before it. It was built in the 15th century and painted by several masters. The painting on the triumphal arch was signed and dated. Its author was Klerigin from Koper who painted the Annunciation in 1471 and beneath it, three saints on each side of the arch. The composition of the Annunciation is framed by elements of architecture: two fluted columns with Corinthian capitals bear the architrave decorated with an antique-like vine. The angel in light clothing on the left side of the arch kneels before the high wall with a crenulations behind which are tree tops. Mary is kneeling with arms crossed on her chest in front of a high book on a lectern, and behind the canopy bed. A clear drawing, accentuated use of antique-like motifs and an attempt of an illusionist representation as a means of expression of the Renaissance speak of modern tendencies that influenced Klerigin. Other painters reflect non-Mediterranean, northern influences. On the southern side along the sanctuary, the author of the cycle of Mary’s life paints in the style of soft Gothic. Opposite his works, between the two bordures of acanthus vines are six scenes painted in the Knitterungstil. In the upper register, the Virgin Enthroned is surrounded by angels, and on the sides, by representations of St. Rocco and St. Sebastian. In the lower register, in the centre is the scene of St. George Slaying the Dragon and on the sides are SS. Christopher and Peter. Beneath the feet of St. Christopher is Melusine, a two tailed mermaid with a crown on her head. Beside St. Peter is the donator – a farmer (there is a scythe beside him) who had enough money to commission this painting. Other frescoes, the Christological cycle containing twenty-four scenes, are attributed to the so-called Colourful Master, who simplifies the sub-Alpine art tendencies.

The Church of St. Mary is some hundred meters below the village.

The Church can not be visited except during Holy Mass.