The Church of St. Nicholas

The quality and the synthesis of the Central European Late Gothic and Italian Renaissance elements rank Pazin frescoes in the Parish Church of St.Nicholas among best mural paintings in Istria. 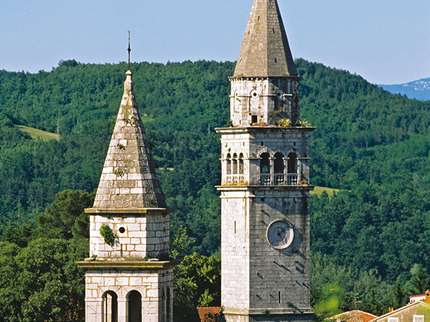 The Church of St. Nichols is located in the very centre of Pazin. There are brown directions marking the way, which should be followed.

The parish church of St. Nicholas in Pazin with a pronounced Gothic apse was first noted in 1266. With the passing of time, it was expanded by the Late Gothic sanctuary and the Renaissance chapel added to the central nave. Its massive Baroque reconstruction occurred in 1764. Frescoes in the sanctuary of St. Nicholas church were painted around 1470 by an anonymous painter, a trained master, a part of the Jacob Sunter circle, also known as Austrian Master Leonardo from Brixen. The quality and the synthesis of the Central European Late Gothic and Italian Renaissance elements put the Pazin frescoes among the very top of mural painting in Istria. The central, rhombus bay of the church sanctuary nave shows St. Michael, surrounded by scenes of the genesis and the fight between good and fallen angels or the original sin. St. Michael leads good angels who win over the evil in a ferocious fight. The genesis cycle consists of the repeated image of the God the Father with the crown on his head. It starts with the scene of the first day or the creation of the world, then follows the second day and the creation of the sky, the division of the land from the sea, the creation of the Sun and the Moon, fish and birds and finally the creation of Adam and Eve. The final scene of the cycle is the image of Adam and Eve with the God the Father next to the tree of knowledge of good and evil. Murals of prophets and scenes from the Old and the New Testament are shown on lateral walls. A large composition of the Christ's crucifixion is on the eastern wall, which is today, unfortunately, not visible because of the main altar which was put in front of it during the Baroque reconstruction of the church. Pazin frescoes were painted under the influence of the Biblia papuerum (the Bible for the Poor), a 15th century wooden carved edition.

The Church of St. Nichols is located in the very centre of Pazin. There are brown directions marking the way, which should be followed.