The Church of St. Stephen in Zanigrad

Red and yellow ochre and pastel green prevail on the Zanigrad frescoes made in the early 15th century. They have been preserved only in the nave of the church. 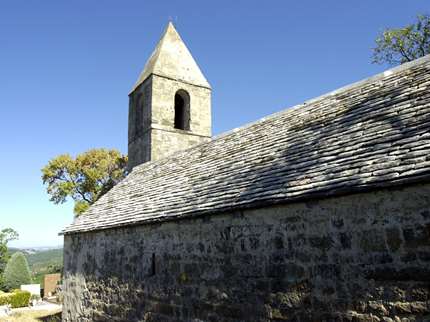 Following the Istrian Romanesque tradition, the church was composed of a long, flat covered nave and a semi-circular arched altar area. Its northern facade was added a belfry in 1521 dedicated to St. Stephen. The church was once completely painted: along the nave walls and in the presbitorium. The latter was completely ruined, while the ones in the nave part were heavily damaged. On its southern wall the scenes are as follows: The Stoning of St. Stephen, St. George Slaying the Dragon and Holy Sunday. The northern wall bears preserved scenes of St. Lawrence's martyrdom and the Adoration of the Magi. On the western wall angels blowing their horns invite the dead to rise from their graves and approach the Last Judgment together with the living ones. Christ is in the centre of the scene, above the entrance door, seated in the mandorla surrounded by angels and a sword in his right hand. The scenes are animated by curved lines of the drapery and by the geological parts of nature. The prevailing colours are red and yellow ochre, with the glaring white bodies standing out. Decently, beside them appear pastel green colours. The frescoes are dated to the beginning of the 15th c. Because of their architectural shape, their influence can be found in the Trecento Padua painting, while the typology of characters with tall foreheads is considered a characteristic of the Italian region of Furlania. They have recently been associated with the frescoes at St. Sylvester near Oprtalj. The common elements are their bordures and velarium, details of architecture, figures and military equipment.