The Church of St. Vincent

The most comprehensive cycle of frescoes is hidden in the Church of St. Vincent. They were painted by master Ognobenus from Treviso. 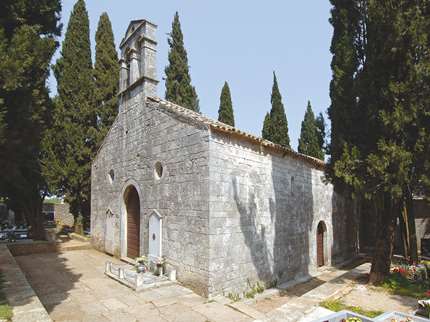 Svetvinčenat is located on the old Pazin - Pula road. The Church of St. Vincent is at the cemetery.

The first St. Vincent Church dates back to the late 10th century, when the Benedictines built both the church and the monastery. The abbey church was replaced in the 12th century by a simple Romanesque church dedicated to the same titular. The monastery was dissolved in 1314, and only the Church of St. Vincent remained. It is especially interesting from the architectural point of view, as a single-nave church with three inscribed apses. Of the three layers of frescoes, the oldest, first layer is only suggested by traces of faded colour. The second, most significant one dating from the end of the 13th c. is attributed to Master Ognobenus from Treviso as evidenced by the inscription under the window of the southern apse. The third layer, dating from the second half of the 14th c. depicts the restored images of Apostles and partly preserved altar painting on the northern wall depicting an image of a female saint and the donator. Frescoes painted by Master Ognobenus represent the most comprehensive Istrian cycle of Romanesque frescoes painted under the Byzantine influence. On the side walls Ognobenus illustrates the Martyrdom of St. Vincent and St. Valerius, as well as scenes from the Life of Christ such as the Visitation, the Crucifixion or the Last Judgment. In the apses are scenes of the Baptism of Christ, Maiestas Domini and Maiestas Virginis. The wide triumphal arch reveals both scenes of the Annunciation and Cain and Abel's Offering. Iconographically interesting is the oldest calendar with allegorical representations of months. The frescoes are significantly damaged due to the humidity of walls. Perhaps it is this very patina and mystical quality that render these frescoes so fascinating.

Svetvinčenat is located on the old Pazin - Pula road. The Church of St. Vincent is at the cemetery.