The Da Ponte fountain is the last station of the aqueduct, which supplied Koper with water. Its present day Baroque appearance stems from the mid 17th century. 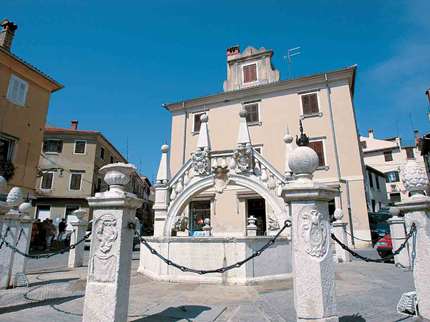 On the northern part of the Prešern Square is a beautiful Da Ponte fountain, mentioned as early as 1423. The square served as the main connection between Koper and its hinterland, as well as the last point of the aqueduct by which the water was transported from the neighbouring hills. The Da Ponte fountain was its final station. Its current Baroque appearance stems from 1666, when podestá Lorenzo Da Ponte, after whom it was named, had it re-built. The arch with the balustrade symbolizing the bridge is placed above the octagonal fountain pool, which was additionally decorated by four pyramids, each with a sphere on its top. Among three crests on the fountain, the Da Ponte family one has a bridge (ponte) as a family symbol. Some experts believe that the very appearance of the Da Ponte family is reminiscent of Ponte delle Guglie, a bridge in Venice. In the foot of the arch four masquerons were carved representing amphibian deities and eastern figures. Metal pipes stick from their mouths, pouring water into the fountain. To prevent the cattle access, the fence was built around the fountain consisting of 15 columns decorated by crests of the families who had contributed to the construction of the fountain. Apart from the crests, columns were also decorated by spheres, fruit baskets and pine trees, set at their peaks. The fountain was used until 1898. During its renovation in 1990, earlier water supply pipes which supplied the fountain with water were found.