The Fortress of Črni Kal

The fortress of Črni Kal was noted in the 11th century. Apart from being a resting place for traders and travellers, it was also the place of the conflict between the Habsburgs and the Venetians for the dominance of Koper. 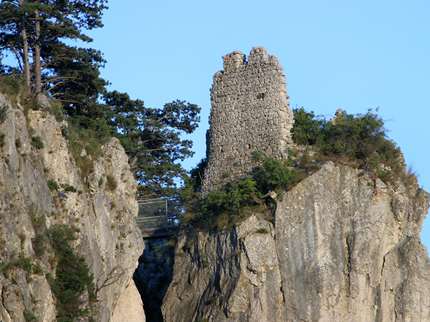 The ruins of a castle overlooking Črni Kal, called Town or Old Town by domicile inhabitants, stand on a cliff some 30 meters high that once could be reached only by a four-meter-long drawbridge. Situated on the road through the Rižana Valley towards Klanec, between the Adriatic Coast and the interior, on the border between the Venetian and Habsburg interests, Črni Kal was mentioned as early as the 11th c. Following the war fought against the Turks, the entire defensive complex, including Črni Kal, was taken over by the Koper municipality. It was a resting-place for tradesmen and travellers, but also a place where conflicts for the supremacy of Koper, the Habsburgs took place, as well as attacks by the Uskoks. As the fortress of Črni Kal was not strategically as important to the Venetians as Socerb, they handled the defeat from Habsburg General Krsto Frankopan with ease as well as its conquest following the attack on the area surrounding Venetian Koper, when it was pillaged by the Emperor followers. Črni Kal, controlling the entire valley, during the Uskok War and together with Socerb, represented the major point from where the Habsburg soldiers invaded their enemy. As the period from the early 15th until the first half of the 17th century was noted for its frequent pillagings, the unapproachable camp was established beneath the fort for the locals to store their possessions. Today, the cliff at Črni Kal is a popular climbing site. It offers rock-climbing fans a variety of routes with different climbing grades and lengths all year round. A local attraction is the "leaning tower", a belfry of St. Valentine's Church from the 17th c. which inclines as a result of the caving in of the ground.