The Path of St. Lucia - Skitača

The path of St. Lucia leads towards the Brdo peak, where a small and the only water source on the entire surrounding area of Skitače is located. Water is collected in the St. Lucia's školnica, a small dent in the rock. 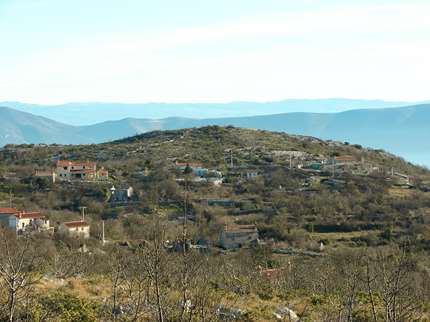 Take a car from Labin to Brgod and further to Brovinje to Skitača (20 km one way).

There is 1 km of light walk from the village to the St. Lucia's source.

The village of Skitača is located on the southern most part of the Labin peninsula, on the 425 m high hilltop, surrounded by four hills - Goli, Oštri, Brdo and Orlić. These are the village protectors against harsh bora winds, frequent in the area. Skitača was founded in the 15th century, when the refugees fled before the Turks. Its name, probably of the Vlach descent, marks the people who move about – drifters. The St. Lucia's path is named after the saint protector of the parish and the church. It leads from the mountaineering home run by the Mountaineering Society Skitaci from Labin, and further through the village to the peak called Brdo. Only ten meters below the Brdo peak is a small and only water spring in the entire Skitača area, the final target of the path which is not demanding and mostly straight, thus suitable for all ages. The water from the spring is collected in a small dent in the rock called St. Lucia's školnica or only školnica by local population. It does not dry up, not even during the driest summer months. There is a legend going around Skitača and surrounding villages for centuries, the legend of St. Lucia and her healing water. The legend says that the saint asked from people to build her the church. They stalled and postponed. Sad and tired, St. Lucia climbed the nearby hill, sat and cried. Feeling very tired, she fell asleep. When she woke up in the morning, she noticed a dent in the rock filled with water. She washed up. It is said that the školnica has never dried up since. Many take pilgrimage to see it: believers, amblyopic and the blind hoping for miracle from St. Lucia, the protector of the eye sight and the eyes. St. Lucia got her church eventually. It was built in 1616.

Take a car from Labin to Brgod and further to Brovinje to Skitača (20 km one way).

There is 1 km of light walk from the village to the St. Lucia's source.