The Pazin Abyss is protected by law. Its entrance is under a 200 m high rock. Its interior hides two lakes, the Martel's and the Mitro's, which are mutually connected. 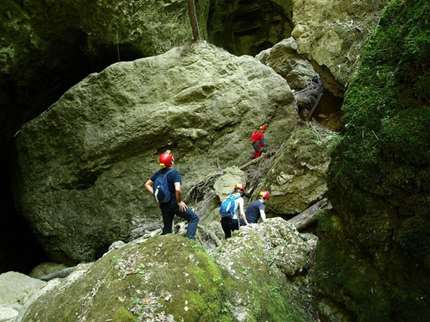 The Pazin Abyss or the abyss of the Pazinčica river, the longest Istrian subterranean river, is located in central Istria. A well-known Pazin Castle was built above it. Hydrogeologically, the pit is the abyss created at the border of a waterproof bed of the Pazinčica basin and waterproof limestone forming entire south-west Istria. Pazinčica used to flow above the ground, passing Bermo and Dvigrad all the way to the coast and forming the Lim Bay. The Pazin Abyss is protected by law and declared important landscape. It encompasses the canyon and the Pazinčica abyss which is about 500 m long and about 100 m deep. The subterranean part of the Pazin Abyss is 270 meters long. The first speleological excavations started in the late 19th century, when Frech speleologist Alfred Martel made the first layout. During the 1960s, Mirko Malet designed a detailed one. The entrance into the Abyss is under almost 200 meter high vertical rock which holds the present day houses of Pazin. It is entered through a high and wide semi-circular arched cave. The subterranean canal stretches further south-west, goes narrow and wide, and finally creates a long and final hall with a siphon lake also known as the Martel Lake. It connects by a siphon with the next in line Mitro's lake, a visible but unexplored extension. The unusual play of nature inspired Jules Verne to take the characters of his Mathias Sandorf novel through the mysterious Pazin Abyss. It has also inspired other writers as well, including Nazor and Dante.