The Podpeč Castle is the most recognizable for its round tower with Renaissance architectural elements such as the wreath or gun holes. The House of Prkič is the most famous. 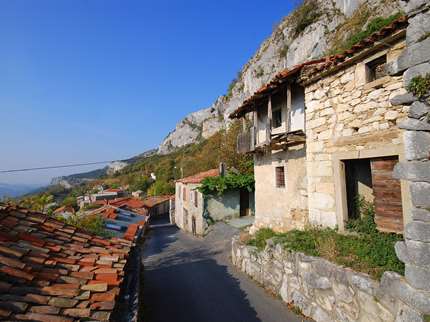 The fortress can be reached by a marked and partly safe mountain path (10 minute walk). The tower is open for visits upon the previous arrangement with the Institute for Cultural Heritage Piran.

The village was developed in Koper's hinterland, above the valley of the Rižana. The oldest recognizable structure is the 11th century round tower. Although at first it seems small and insufficiently defensive, its cliff position is excellent, which allowed it the control of the valley all the way to Trieste. Podpeč is somewhat special as it connects the tower-shelter and the pit camp with drinking water. Its defence was organized along two floors. As all camps in Istria, this pit was also built in stone. The tower in Podpeč is the work of a trained stonemason. The cantilever Renaissance wreath, special firing holes and other architectural elements prove the mastership and the experience of the builder. The entrance into the tower was elevated and more difficult to reach by conquerors. The village was more significantly renovated and expanded in the 15 c., when the House of Prkič was built. This is the most famous house constructed for local clergy by masters Andrew and Benko from Sočerga. This is the time when a small square with a drinking water source was erected as well as one- and two-storey houses along the main street. Next to the Church of St. Helen is the local cemetery. The large Gothic edifice with a deep sanctuary was painted in 1489 by the famous workshop of John from Kastav, of which there was the inscription on the bordure between the scenes of Christ's Crucifixion and the Adoration of the Magi. Unfortunately, it has faded. Although it fell under the Venetian rule in 1535, the tower became the part of a number of fortresses which task was to protect the Venetian Istria only some 20 years later. It was attacked and burned in 1615, when all the survivors fled. Despite grave circumstances, the proveditor ordered the refugees to return and renovate their homes. Nevertheless, Podpeč is today mainly deserted.

The fortress can be reached by a marked and partly safe mountain path (10 minute walk). The tower is open for visits upon the previous arrangement with the Institute for Cultural Heritage Piran.