Only a tower has been preserved. The Renaissance house and the town loggia stand out in the village. Roch was a strong centre of the Glagolitic literature from the 13th century. 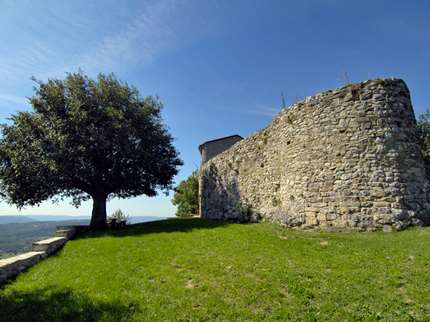 It lies on the hill south-east of Buzet, along the Buzet-Lupoglav state road (D44)

Roch and Hum have similar histories, which is not surprising in view of their vicinity. Numerous archaeological Roman findings confirm the relatively lively Antiquity in this area. The real development of the village occurred in the Middle Ages. It was mentioned as Ruz in the document in which Roch is given as a gift by King Henry IV to Marquis Odolricus in 1064. In 1102, it was mentioned as Ronz. Between the 12th and 15th cc., the building activity in Roch flourished. The castle, of which only the tower has been preserved, was located in the north-western part of the village inside the current walls. In 1421, walls were erected by the Venetians only 9 year after they had destroyed them in conquering the settlement. They decided to restore the entire village, primarily in light of its strategic position and increasing Turkish peril. In the centre of the village stands out the Renaissance house from 1475 and the 18th century town loggia. Since the 13th century, Roč was a strong centre of the Glagolitic literature housing famous Glagolitic priests including Šimun Greblo, Juri Žaka or Ivan Benči. The village preserves the Breviary of Vid from Omiš and Bartol Krbavac Missal. The collection of the Roch parchments, the administrative correspondence from the 16th until 18th century and the 15th century Roch missal have been preserved. The latter is stored today in Copenhagen.

It lies on the hill south-east of Buzet, along the Buzet-Lupoglav state road (D44)